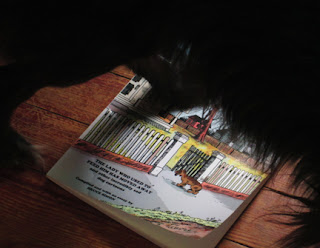 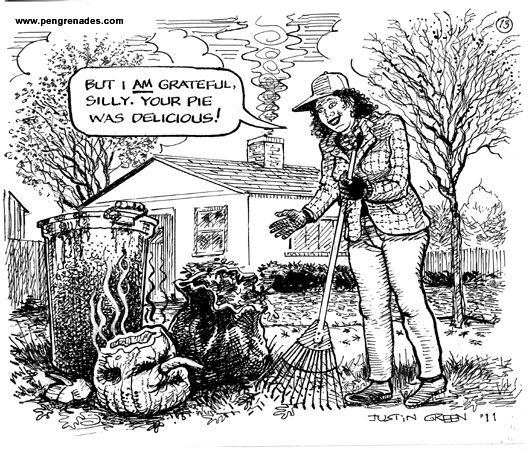 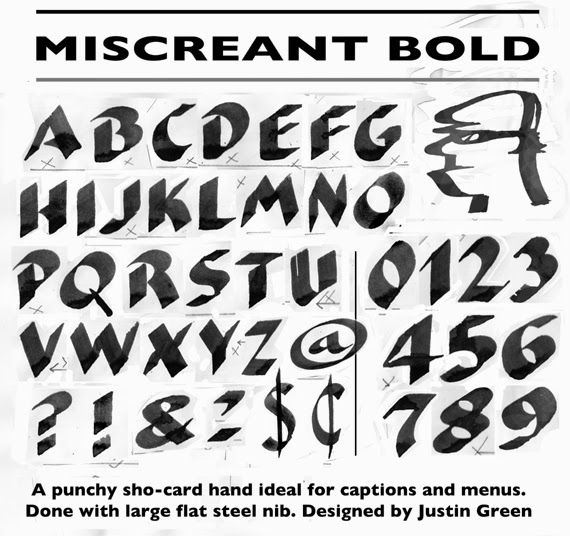 In the previous post I described two different kinds of approaches to pen drawing. The second method shows a way of discovering imagery through a passive or receptive process. Now I am discussing two different disciplines that fall under the first category: Intentionality. The kind of pen drawing that I am contrasting with calligraphic lettering may be freer and more interpretive than lettering work, but there is nothing mysterious about it. If called upon to describe the function of any line or mark, the pen artist should be able to verbalize the short term goal. "I am using a long curving line to in the underside of the bowl. Then I will thicken it with hatch marks." Even if the work is non-objective, a conscious process still might be monitored: "I am drawing diagonal lines to the left that will taper as they reach their tips." (This may not be true for the pure "doodle," which sometimes has a life of its own--like the Ouija board stylus.) Drawing encompasses many methods and techniques. But the mechanical process of transferring ink from bottle to nib to substrate requires that certain mechanical principles be observed. More modern tools and markers, with built-in ink supply, are free of most concerns that come with the use of traditional dip pens.

Some artists are "luckier" than others in having a natural gift of visualization; but being able to draw is also a discipline that can be learned and refined over a lifetime. And under the broad heading of drawing, working with pen and ink might be more accurately described as a craft. It involves having a workmanlike attitude about proper use of tools and materials. Among brush letterers (a subgroup of pen letterers) the term "artist" is an insult. It means someone who is a dilettante and while able to produce facile results, doesn't understand the high standards of work produced though countless hours of applied practice.
True pen lettering is more like drawing than copying ideal forms. It is bold and direct; often done quickly, and never quite perfectly. The marks made by a lettering craftsman fall within a narrow range or "tolerance," or near perfection. The greater the mastery of the instrument, the less tolerance will be noticeable.
Though copying of other artists' work is no longer widely accepted as being a necessary part of art education, it is most definitely appropriate at an early or intermediate stage of training in lettering to copy ideal typographic forms. Each typeface has distinct features which may elude the eye until patient portraits are done. Viewing alphabets upside down is another way to discover unique properties. Even an alphabet as seemingly uniform and mechanical like Helvetica will yield many subtle surprises to the 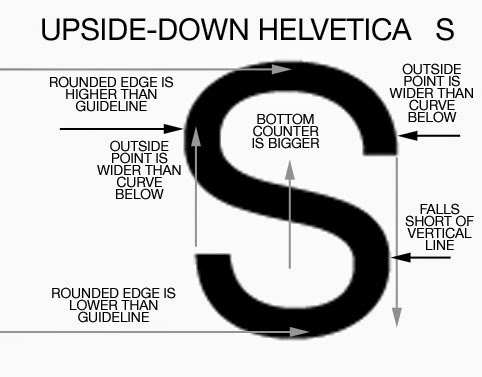 wide-awake student. Any time spent in this kind of study will yield immediate results in visual acuity and eye/hand coordination, skills which are so necessary for progress in pure drawing. Both drawing from letterforms and life require a constant exchange of seeing positive and negative shapes in juxtaposition.
The shapes within and around letters are called "counters," short for "counter space." Some prefer the term "negative space." Through the double vision of seeing both a stroke with its surrounding space  one gains the ability to layout individual letters in a balanced way. This is the basic definition of "kerning." The most faithfully rendered letter will lose its appeal if it is not properly aligned with its adjacent neighbors. This is achieved through the balance and distribution of counters, regarding these shapes to be just as important as the defining strokes. Without going into the basics of lettering theory and design, this brief description is lettering discipline in a nutshell.
Whether drawing with a fine flexible point or a broad calligraphy pen, holding a pen for lettering involves a steady grip. Once guidelines are marked, most calligraphic alphabets are inked in a rhythmic way. Stroking marks at a similar pace imparts a uniform stroke. It's also important to have the same relationship of hand to pen throughout the production of the desired text. Of course, there is a subtle awareness of the entire hand while lettering single line inscriptions or larger bodies of text. But there is a greater awareness of the mechanics of wrist and forearm when lettering as opposed to the random activity of free drawing. A light lock-grip is used for most calligraphic styles. More often than not, the fingertips are pressed into service only when drawing or doing specialty alphabets. For example, when doing a fluid script the standard lettering grip is less constricted and closer to that of a free form drawing.
Is there an ideal was to hold a pen? I will close with this antique image from a type-high block, which shows the ideal relationship of fingers to pen handle. There is a reason for doing most pen work with the first two fingers and thumb, as it makes optimum use of the hand muscles for pushing the flexible nib to its most expressive capability. This orientation of fingers could serve both extremes of free-form artistic lines or the narrower range of muscle handling required for plain one-stroke lettering. This will be covered in the next post, titled, "The Perennial Grip." 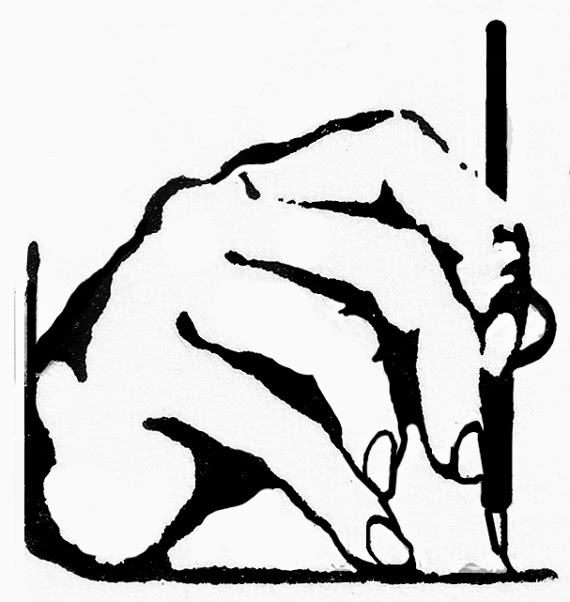 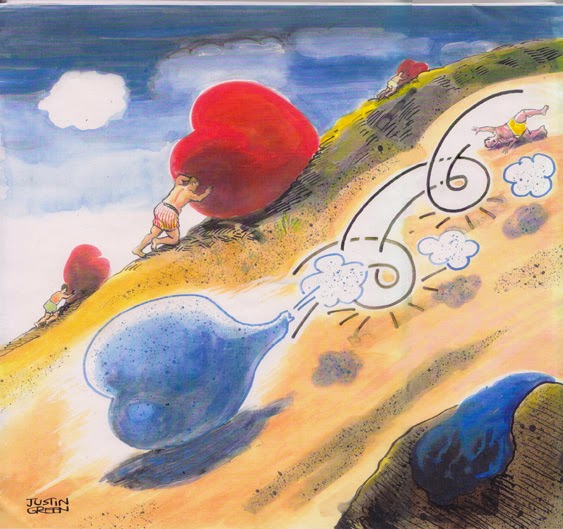 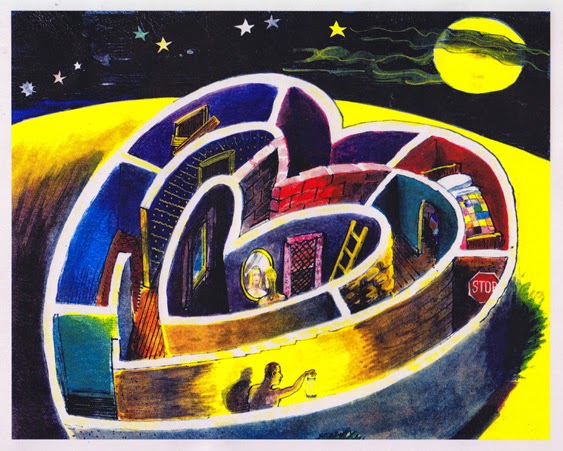 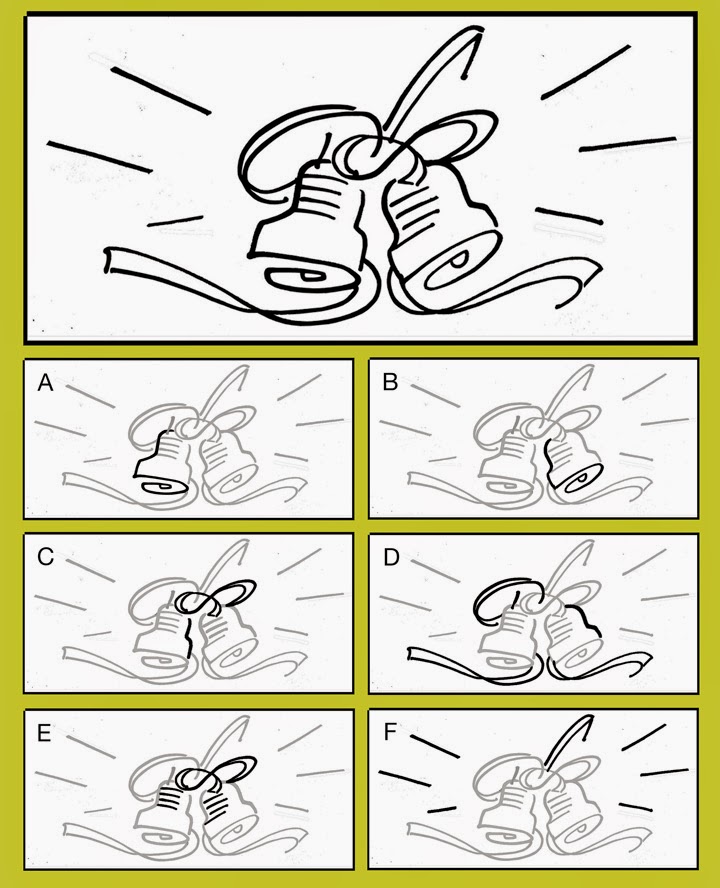 I recently inscribed over 100 envelopes for a wedding. On each back flap I added this little emblem under the return address. It is comprised of several components all done consciously, yet freely, within fixed parameters. The stroke groups are shown in A to F.
This is a very direct way to learn technique. Take any simple image and break it down into specific moves, then knock out dozens of them. You'll soon notice that each result is slightly different. Every phase of the operation will have its challenges which you'll gradually learn to overcome and finesse. You may even decide to combine some lines or rearrange the order as the design becomes more efficient. Plus you'll also be making aesthetic judgement calls about which drawings are the most successful. this subtle awareness will influence subsequent work. 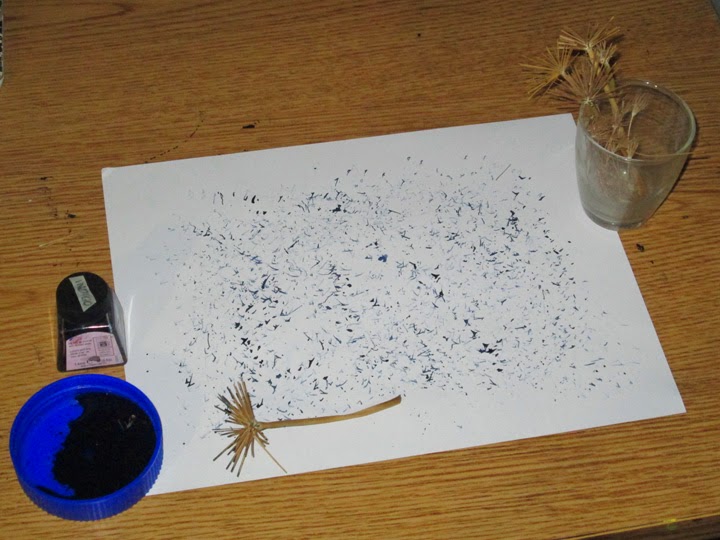 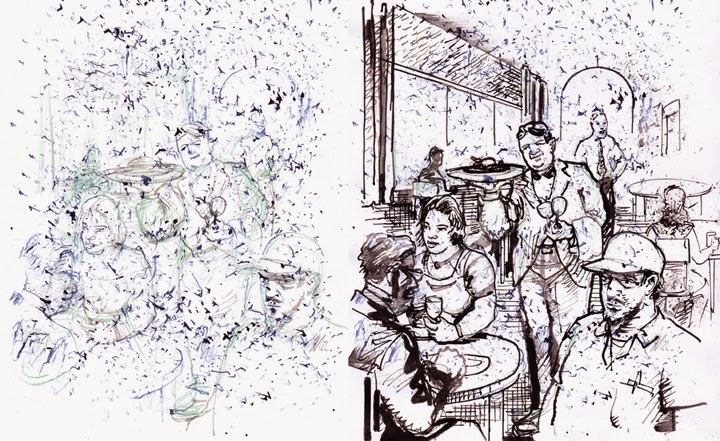 In contrast, here is a different way of drawing with a more receptive process. Working into a random texture provides countless opportunities for finding images that come almost fully formed. I am using a dill pod to texture a background, but other methods and tools will do just as well: a sponge, wad of tissue, stippling with an old ragged brush, etc. Little concern is given to technique in this process. With a little squinting, coffee and imagination, a myriad of images will compete for your attention. This is the polar opposite to the calligraphy above. That type of work begins with a conscious and controlled intention. In this receptive way of drawing, you are allowing risk to enter into the picture. 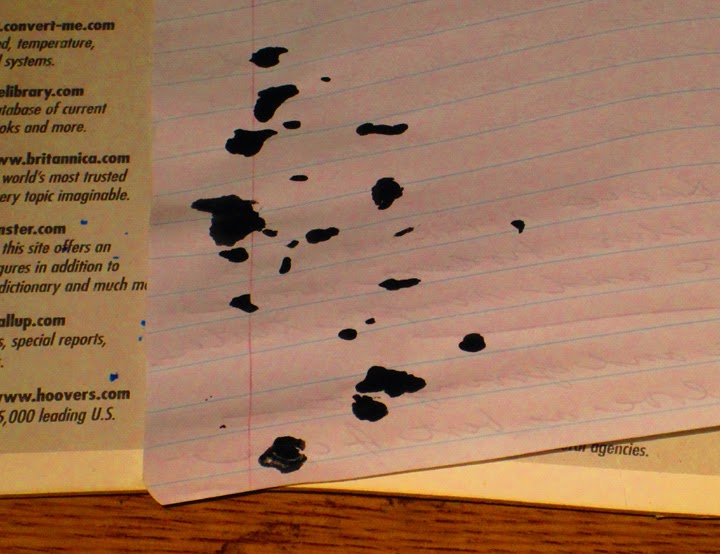 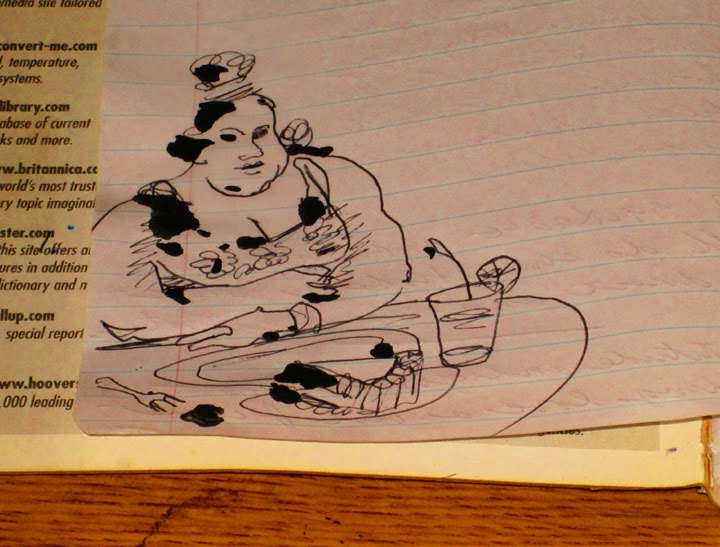 I've also included this larger ink blob example in which dense spots are conducive to visualizing images. This is much like the famous Rorschach test, an old  technique of discovering psychological makeup of subjects under observation. Since most artists are nuts, this is just their meat. 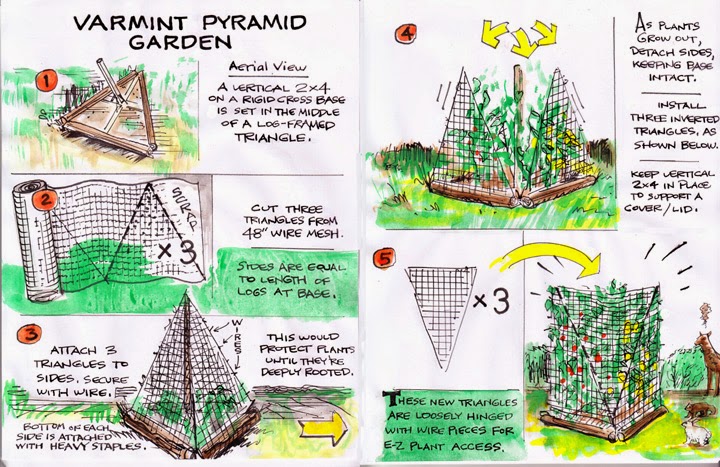 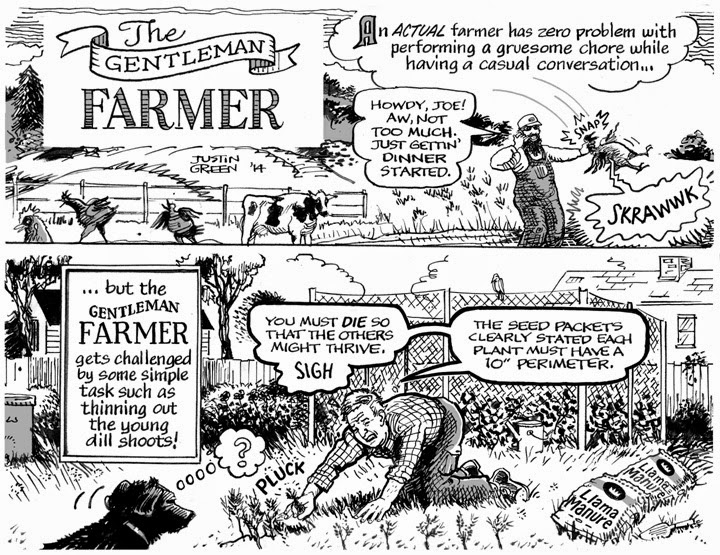