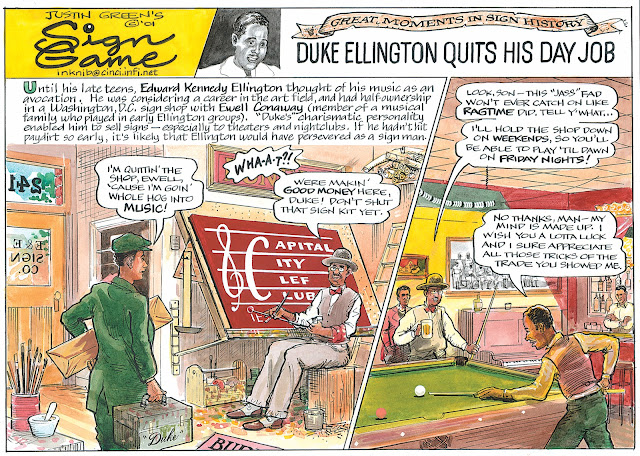 Another promising sign painter who left his sable brushes for a musical instrument was the great jazz guitarist Tal Farlow (1921-1998).  But he kept his hand in, occasionally painting signs for his own gigs even when he was well known (Coltrane once saw him perched on a fire escape just before a performance). Remembering the lean times, he probably wanted to have a skill he could depend on long after the fickle public turned a deaf ear. But the growing jazz audience never tired of Farlow’s innovative fret work, so he eventually stopped bringing his sign kit along to musical engagements. But after his great albums of the ‘50s, he returned to professional sign painting in Seabright, NJ. Then there’s Woody Guthrie… see “Bound For Glory.”
This strip originally appeared in Signs Of The Times magazine. That’s not my current email address…it’s justin.inknib@gmail.com.
Posted by Justin Green at 2:23 PM