A Brief History Of Emblem Prints Under Image 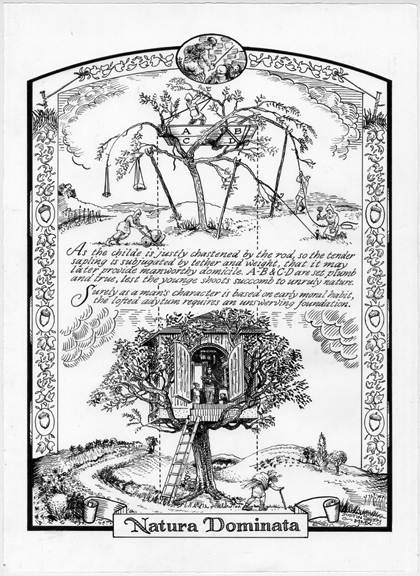 Emblem prints were the first posters produced by the new print technology. There had been popular woodcuts produced earlier which made facsimile art available to the masses. But these prints lacked the complexity and subtlety of the new art form. From the 15th Century on, there was a wide demand for complex and refined images and text. The prints could be religious, didactic, poetic or naturalistic. Often they were printed as folios that were thematic to entice collectors (and perhaps to elicit subscription front money).
Today the word “emblematic” is merely an adjective than an NPR reporter might use to describe an action or event that embodies a new zeitgeist. Yet some emblem images had “legs”. For Vermeer, among many other painters, to reference certain emblem prints in the background of a few interiors suggests that they had a timely cultural significance. Google EMBLEM NETHERLANDS (then EMBLEM….ITALY, GERMANY, ENGLAND, SPAIN, FRANCE) and you will be richly rewarded with hundreds of surprising and beautiful images. The basic components of an Emblem image are simple:
A title
A frame
An image
Some expository text

These building blocks have varying degrees of emphasis depending on the individual artist and country of origin, not necessarily in that order. The Italian prints I’ve seen tend to have the most elaborate borders. But I am a babe-in-the-woods when it comes to this wonderful, forgotten genre. If any readers take the trouble to Google the source countries, please share your discoveries with me…justin.inknib@gmail.com
This pen and ink drawing was done by me in late ’10, specifically for a show in Seattle titled, “Medieval Minds.” My use of central text is unusual because most emblem narrative occurred at bottom. Even more apostate is my use of satire.
Posted by Justin Green at 9:48 AM 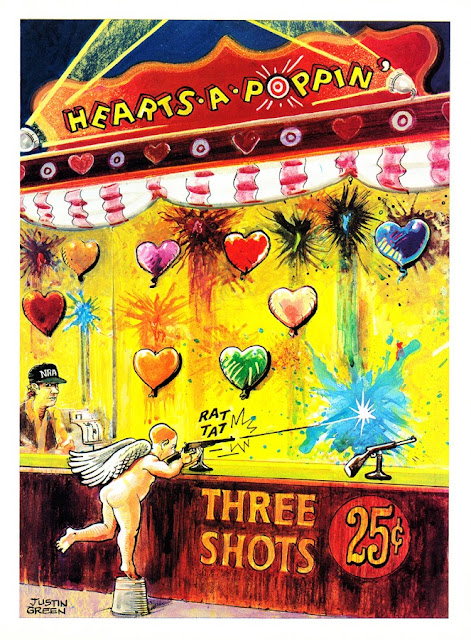 Though this image is now apropos, the timing of its original publication couldn’t have been worse. On Dec. 7, 1993 a madman named Colin Ferguson boarded a crowded Long Island Railroad commuter train and methodically killed 6 passengers and wounded 19 others. Living in California at the time, I was aware of incident, though my cartoon had previously been conceptualized and the preliminary roughs were done and approved by the esteemed New Yorker magazine. Perhaps as an acknowledgement of the crime, I included the NRA hat as the final deadline approached. I didn’t realize that the volatile trial was scheduled for Feb. 17, 1994—while this Valentine’s Day issue was still on the stands. My cynical gag, intended for those who had ever been wounded by Cupid, was now an inadvertent statement about mass murder.
As my dear mother often said, “Fool’s names and fool’s faces are often seen in public places.”
Posted by Justin Green at 5:47 PM