Using A Tablet As A Lightbox 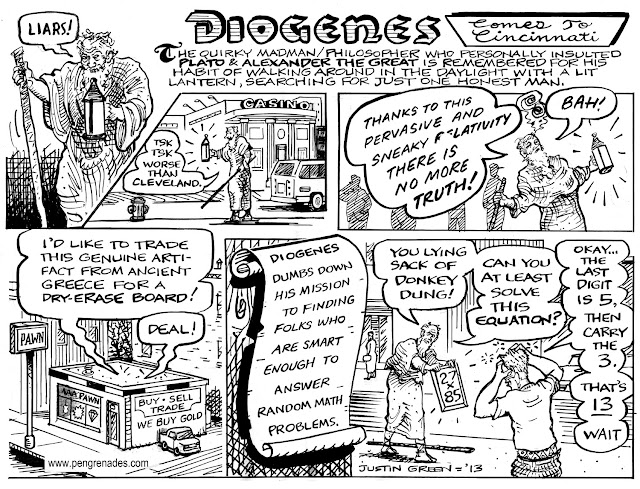 This is a departure from the usual posting of older work because this is the first piece in which I explore the potential of the tablet as a substitute for the old-fashioned light table. I use a humble Nexus 7, which only has a screen that measures 3.75" x 6". But that's enough to handle most single panel work.
I began the strip the usual way--with a series of disjointed little doodles, intelligible to nobody but myself. A basic continuity of ideas was determined, then the continuity got broken down into basic frames. After a motive was determined for each panel, the dialog suggested itself.
What is new about this strip is that once I had the basic poses conceived as stick figures, I drew directly on the tablet in a bare bones program called Quill. By toggling the scale and size of the scribing tools, I was able to arrive at poses that had the maximum dramatic effect, then finesse them to a degree that would have been very tough on the drawing paper had I used a pencil and resorted to several erasures.
The great thing about using a tablet program for doing roughs is that once you have arrived at the optimum sketch, you can tweak it to exactly the scale that you want by pinching the image. The one proviso here is that it only works with 1-ply (Strathmore 500 Bristol); also a thin piece of glass is needed to put over the tablet while the tracing is being done. Otherwise the tracing will toggle the image. Okay, there's one more annoying thing: you probably have to do this at night with all other lights off. But chances are, you're working at night already...
This method provides a seamless way of accessing imagery from the web, too. That Diogenes portrait I did at the top is a tracing two times removed from the excellent source material that I had. And that was only one of a dozen beautiful images that I could pick and choose from!  I'm glad that I learned the traditional way, though; even this method depends on a tactile relationship with the drawing tool. I know this discovery is not for everybody. But before you reject it out of hand, I think it's worth a try.
Posted by Justin Green at 4:18 AM