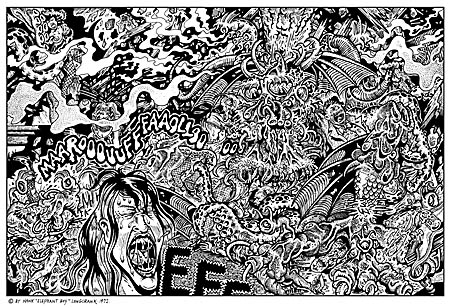 If you are familiar with my work, you can probably spot a drawing by S. Clay Wilson from across a room. You have doubtless heard about his debilitating condition, the result of a catastrophic fall several years ago. There were hopeful signs of in the early weeks following his recovery from a coma. These days those signs are far and few in between days of constant maintenance and care by his devoted wife Lorraine Chamberlain in their S. F. apartment.
The mercurial, provocative, hilarious Mr. W is somewhere inside of the being who resembles him. An occasional flash of the eyes and hint of a smile belie the long silences and monosyllables. He no longer draws, but  knows that he once did. It's on us to remind him of how great his work is and to affirm his presence here. Recognition of birthdays (especially his own!) is still one of his core beliefs. If you could send a card to him, Lorraine will patiently read it to him and explain the imagery. If you read this post after the all-important date, then maybe you could send a Christmas card. Or better yet, a Halloween card would touch his old demon's heart. You can also send donations at any time to:
S. CLAY WILSON S.N.T. (Special Needs Trust)
P.O. Box 14854
San Francisco, CA 94114
or through secure site:
http://www.sclaywilsontrust.com

I recently wrote about the importance of Wilson's work in the Afterword to the McSweeney's edition of Binky Brown Meets The Holy Virgin Mary, so I don't need permission to quote:
The very title of the work was a conscious nod to S. Clay Wilson. The word "meets" is in reference to Ruby and the Dykes Meet the Pirates. The active verb guarantees conflict, or reconciliation of opposites. The title of my book was a resolution writ large, to hasten confrontation with my yet-to-be-determined deepest fears. Though seldom lauded these days in the same sentence as Crumb, it was Wilson's feisty spirit that permeated many of the Underground titles, so devoid of the milk of human kindness.
Soon after meeting me, he dubbed me "Guilty Green." With his strong personality and penchant for the undiluted, if uncomfortable truth, Wilson constantly challenged my artistic pretensions, yet I managed to hold on to a few of them during our heated exchanges. He was/is consistently true to his unique vision, wielding his pen with astounding versatility, creating immoral panoramas with the devotion of a monk. He is also capable of producing very tender images. While other cartoonists had published pornographic images it was Wilson's transgressive scenarios that redefined the standard of what is "beyond the pale."
Posted by Justin Green at 5:33 AM