This strip was published in Heavy Metal when Mark Martin was the cartoon editor. Let’s see…66 minus 48 is 18. My long relationship with cannabis went through yet more twists and turns after this strip was done (in addition to the 48 minus 28 years prior) before I arrived to this irrevocable position to put it down for good. After a brief psychic and physical struggle for a season or two, I finally got past the yen to toke. I don’t want to miss a moment of real life! (continued under strip...) 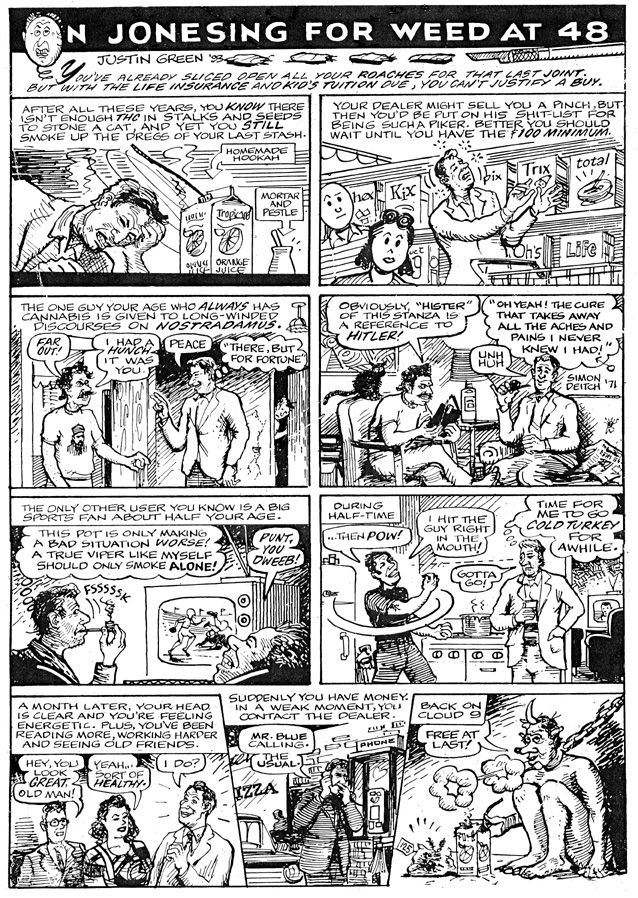 somebody refer to weed as “The Buddha.” It’s anything but. Cannabis Sativa (or Indica for the more jaded) is a cruel dominatrix who exacts a heavy toll for all the so-called gifts she bestows.
These days, unless you’re growing it yourself, chances are high that the stuff has Mexican blood on it. I’m also not buying the concept that this addictive drug is an herb—the more often you get high, the more you want to stay that way and you’ll need stronger and more expensive shit to stay there, period. The health risks are tangible: increased susceptibility to oral and throat cancer; the spleen function is impaired; memory function is blighted; worst of all, if you are combining weed with tobacco use, your chances of contracting lung cancer are increased fourfold. Why do you think the cartoonist Dave Sheridan died in his mid ‘30s and the great Nat King Cole died in his mid ‘40s? “Medical” marijuana for anyone but the terminally ill? See final paragraph.
If you are an artist or musician and weed is part of your muse process, you won’t have the sustaining stamina needed for the long haul. If you smoke several times a day, get it down just once; if several times a week, then one day. If several times monthly, then make it weekly. Or go cold turkey, little sapling. Failing that, try the real Buddha. On the other hand, if you are one of those rare and lucky people who can take it or leave it and your sole source of attaining a pot high is through occasional joints at parties or gifts from friends, more power to you. Still, beware. Few people who are able to truly appreciate a marijuana high can leave it alone for long. That smoky plateau is an egocentric, selfish state of mind that makes you less empathetic to your loved ones, though you keep trying to tell yourself that it’s bringing you closer. What little comforts are you denying them for the continuation of your expensive and stinking habit?
It also makes you vulnerable, dulling the adrenaline you need for sheer survival. You must be able to trust your intuition at all times. Wake up! You still have the rest of your life to muddle through, knowing that you’re closer to a clarity and inner peace far more beautiful than all of those pipe dreams could ever have provided.
Despite all of the above, I’m for legalization—if only to stop the violence in Mexico and the end of this disgusting “Medical Marijuana” movement. I don’t want to see anybody behind bars for dealing or using. The heavy toll on the individual and society by perfectly legal alcohol is far more serious. On the other hand, buzzed driving is drunk driving—and mandatory blood/saliva tests should be taken at all accident sites. There, I have spoken.
Posted by Justin Green at 8:46 AM