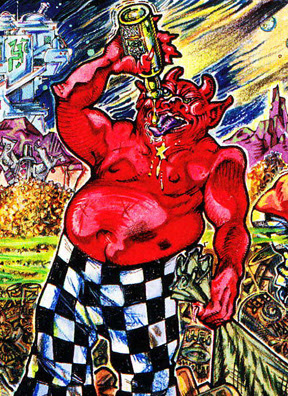 Readers of this blog and those with a general interest in Underground comics know all about the terrible circumstances in which S. Clay Wilson and his devoted wife Lorraine Chamberlain have been living these past few years (see earlier entry “7/25/11 S. Clay Wilson Turns 70”). The quality of Wilson’s remaining life is dependent to a great extent on the energy that Lorraine is able to give him. She needs us to help her continue this difficult and relentless work. The most effective way to do that is to make a donation to the Trust Fund. Please do what you can.


4/21 post...This follows one that I omitted, in which W took a sudden nosedive and the situation looked extremely grim. This one is from the following day. There was also a note thanking all who donated thus far.

When I arrived today, Wilson was sleeping. I kept bugging him, saying it was his 1pm forced feeding, which made him smile even tho he didn't open his eyes. I finally got him to take some bites of his lunch. He managed some grapes, pineapple, the top of his sandwich, and some milk. Better than nothing! Then Ace arrived, and he really did wake up. Ace told some jokes and made him chuckle. Still couldn't say his own name, nor mine, but he was more alert than yesterday and his color had returned. The ct scan showed no change from before, so that was sort of good, at least. Later on I got him dressed and we took him downstairs in a wheelchair and practiced getting him in & out of the bathtub with a transfer bench. He was really cooperative. Then I got the car and we tried to get him in & out of that....but I couldn't get him back out. The therapist finally had to lift him. That will take more work, strengthening his legs. (I won't be able to take him out in the car without help til he gets stronger.) I had been pulling him out of there for the past month without help, nearly killing myself. I can't continue to do that, obviously.

Thanks to everyone who wrote & called. It made me feel so much less alone.
I'll find out next Monday or Tuesday if I'm bringing him home next weekend. They may want to keep him a bit longer to stabilize him and also give me a break before bringing him home, where it will now be more difficult to take care of him. We'll see....
I want to give him many more years of a happy life at home. I believe it's still possible.
Best,
Lorraine

It has been a process, getting the staff at the Tunnell Center to understand how to deal with Wilson.
Even though I have spent at least 6 hours a day there.
The doctor at this new place has changed his meds, even though they lowered them at Davies a couple of days before they discharged him. So yesterday, he mostly just stared at me. (This was disturbing, as he always answers YES or NO to my questions, at least!) The doctor saw him for the first time on Tuesday, as he wasn't there on Monday. That's only 3 days he's known him, so this staring thing was a puzzle to the staff until I tracked him down and told him this was extremely unusual behavior. They didn't know him well enough to think otherwise. They've taken him off Trazadone, which is mostly for sleeping, and lowered his anti-psychotic meds to one dose at night. This is to get him more perky, and willing to get up out of bed. He has walked each day a little farther, but it's still only about 150 feet. In light of this, they plan to keep him for another couple of weeks, so he will presumably be stronger when he comes home.
The hard part is he is so uncooperative with anyone but me. Most days I end up giving him his meds when I get there, as he refuses to take them from the nurse most mornings, even though they call me to speak to him.
This puts a burden on me that has got to stop. I am exhausted from all of this, and don't have the time or energy to do anything else in the course of a day. I get up and get ready to race over there, and leave just in time to get a parking spot at home at the end of the day. I do emails when I get home, eat something, and have to lie down for the rest of the night.
I'm on my way there soon, after I take a shower. Yesterday, by the time I'd helped clean him up, get him dressed and take him for a walk, got him to eat his lunch, put him in the shower seat, washed him down, got his diaper & gown back on and got him back in bed, my back was a mess. But with all that attention he was finally smiling and answering me in the afternoon. I stayed to introduce him to another therapist, and finally got home at 5.
I am excited to see if he's more cooperative today after having possibly adjusted to lower meds. I'll let you all know.
Best,
Lorraine


The night nurse just called. I've been waiting ALL DAY for the techs to arrive to do the ultrasound. Since lunch time, they've been saying they're "on the way". From a neighboring GALAXY? I finally came home with the assertion they call once the test was done.
Anyway...he DOES have DVT. I couldn't understand the answer when I asked where the clot is, but will find out tomorrow when I go. If I hadn't been in the habit of looking him over every day, this could have killed him. And still could til the Cumadin kicks in. Thank god I took photos and insisted it wasn't a SUNBURN on one leg, (like that would be real) and insisted they do an ultrasound. I'm glad I told my sister about it last Wednesday, and she said it sounded like a blood clot. I had no idea WHAT it was. I only knew it looked like an emergency, and told them right away. And it's now a whole week later.
I am relieved that they have found it, but outraged at what it took to get anyone to pay attention. Even today, they were saying "well, it isn't red any more, so it's probably not a clot". I reminded them that he's been bedridden since Thursday, with it elevated. Jesus.
Now I need to talk to a real doctor to find out what the next step should be. I'll try to get ahold of his Dr in the morning, and if nothing else works, I'll go up and ask to speak to the Dr in Davies....the nice one. I need some real advice on how long he should stay in bed, and what to expect. I have a discharge meeting there on Thursday, and am interviewing caregivers. I need to know if he should go back to a hospital, or if he can come home in a week.
I'm exhausted.
Later,
Lorraine

Today's ultrasound showed that Wilson's DVT has not responded to medication, and the doctor now advises sending him to the hospital. I believe he will be moved to St Mary's tomorrow. (thanks to Ron Turner for his reassurance about that place....I only know I don't want him returned to the hospital he was in before!). I am very worried. The clot is extremely large.
Not much else to say. I'll go at noon, and hopefully they will move him shortly after I arrive. (I only know they're not moving him before that.)
Another hard night.....
L
Posted by Justin Green at 8:40 AM