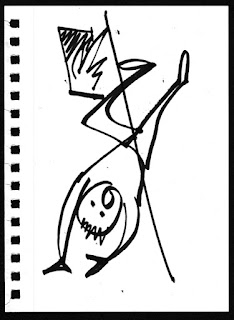 To those following this blog, it may seem odd that posts sometimes appear from a work-in-progress, a technical manual (to be published by the See Sharp Press) on using the dip pen, titled "The Dying Penman." The entries appear out of context, so it should be no surprise that the opening page suddenly appears. The work is slowly unfolding from many sketchbooks, notebooks and files.
<><><><><><><><><><><><><><><><><><><><><>


The great French artist Theodore Gericault said that one should be able to draw a body hurtling from a burning building before it hits the ground. I agree, if the word “doodle” can be substituted for drawing. Even within the field of pen and ink, there are so many types of drawing that the term is almost meaningless. When reading this book, please note the context of the advice that I offer. What may be true for one kind of imagery or style is not necessarily true for another. There are always exceptions to every rule, and no relative truth about art is universal.


What is a virtue in a successful work may also be perceived as a limitation. An artist who excels at bold studies of athletes in motion may lack the light hand so necessary for drawing children. And speaking of sports—please disregard the idea that art is a competitive enterprise that should or will be acknowledged with trophies and public merit. Regardless of the auction value of any artist’s work, living or dead, there is no ultimate winner or “best artist.” People who keep the records, historians and critics, bring cultural and personal bias to bear. Forget consensus opinion, too. Art is not a democratic enterprise. It is my intention to set forth clearly dynamics of pen handling that will be helpful to both beginners and artists at every level.
With due respect to my publisher, this book would never see the light of day if I thought it could be a cash cow. We bring this work to print at a critical time in history for the conscious penman (and even for the print medium). I am seeing what I regarded as a slowly-evolving craft suddenly become eclipsed, corrupted and finally, subsumed by the new computer technology. This revolution has occurred in a mere generation, revolutionizing every purview of hand craftsmanship, from medical illustration to architectural rendering.  I've already lived through this debacle in another field—as a traditional sign painter. It took less than five years for the field to implode after the new computer-generated vinyl letters were introduced in the mid-‘80s! I stubbornly clung to the traditional craft, chasing jobs that involved pictorials and complicated logos; yet even this niche suddenly became dominated by the new dot matrix printers in the early ‘90s. I returned by necessity to pen and ink for a livelihood, never dreaming that its existence would be seriously threatened so soon afterwards. Basic and refined principles of pen drawing are being relegated to historical footnotes. I feel an overwhelming need to describe the dynamic nature of the pen drawing that I have pursued all my life, in the hope that those who are opting for seductive shortcuts will realize what they’re overlooking.
I know by heart the many pitfalls and misconceptions that a beginner might encounter along the way. Before I had any professional training, I entered the field by stealth as an auto-didactic. This is a gift being sent back to myself half a century ago. To my peers, I offer these insights as reference material for the preservation of our craft.