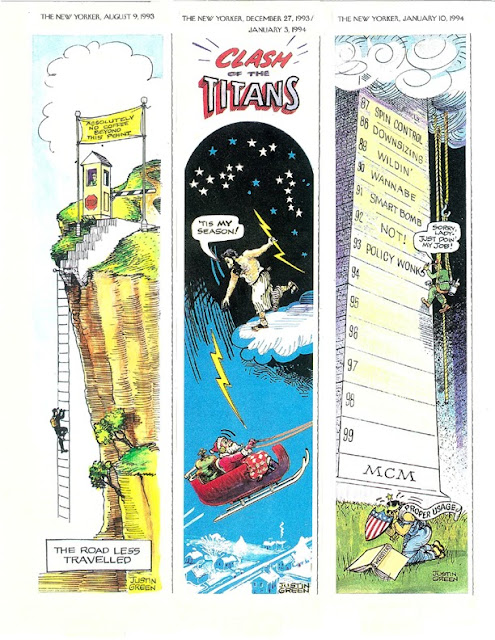 From pre-adolescence I aspired to get one of my cartoons into the New Yorker magazine. My mother and I pasted scores of covers onto a hinged room divider. There was something about the direct and playful quality of the drawing and painting styles that set them apart from the dominant realism that comprised most of the post-war magazine trade. While I had not yet learned to look down on Norman Rockwell, I sensed that he would never do a New Yorker cover, nor would they request one from him. Perhaps she was trying to encourage me to look elsewhere than Mad  magazine for artistic inspiration; though it was the hey-dey—I had just biked through a blizzard to get issue #25.
After some half-hearted & assed attempts to get published at the highly esteemed venue, I finally had a spate of cartoon drawings appear in the early ‘90s. After the initial elation, I quickly came back down to earth. Perhaps an illusory barrier had finally been broken, but I was no happier than before. I had merely peeled a shard from the onion, and there were scores to go. Now rejection was even more painful than before.
Posted by Justin Green at 12:16 PM

These fabulous pelts were forfeited by the original owners when they suddenly became out-of-season.
Posted by Justin Green at 4:46 AM