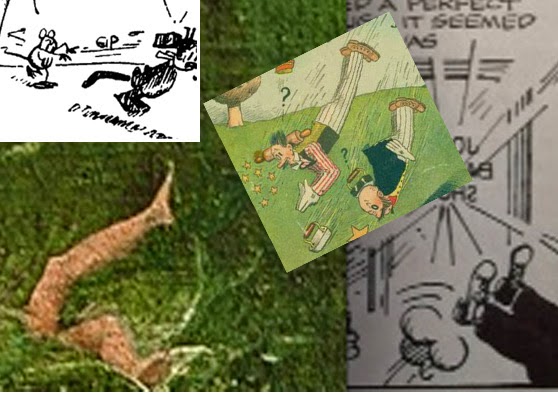 This entry is sparked by a recent letter received from Merrell Hambleton, who commented on the punchline of one of my Sign Game strips, which appeared in Signs Of The Times Magazine (the feature ran monthly in that venue from '87 to '06). While the strip is about a technical breakthrough in a lettering artist's process, it also depicts the cold indifference of the external world to a sudden personal insight or experience. Use of the lofted feet was a conscious nod to my cartoon forbears, whose characters were subjected to cruel and improbable situations. As cartoons developed through the decades, lofted feet (usually with a bold shadow underneath) became a pictorial device that connoted extreme shock or surprise. But Merrell discovered another dimension that gives my cartoon a touch of class. Hence, the title of this post.


She writes: I was struck by the last cell. You write: "Finally came the day when you brushed a perfect 2" O with a few deft strokes, though it seemed like a cataclysmic event, the world was strangely indifferent." The image shows the Sign Painter, thrown backwards by the "O", with just his legs visible. On the left, the man in the barber chair is saying, "Rugs in kitchens? Hmmph! I'm against it." The combination of the legs and the sentiment immediately made me think of Bruegel's painting "Landscape with the Fall of Icarus" and the W.H. Auden poem, "Musee des Beaux Arts", that makes reference to it. Do you know the painting/ poem? 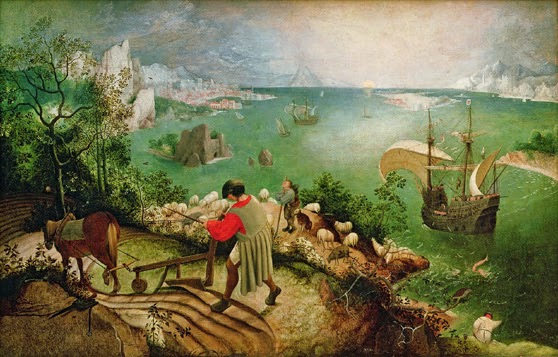 In the painting Bruegel has depicted an unremarkable, quotidian scene—a farmer plowing, a shepherd tending his sheep, a ship sailing into harbor. In the bottom right corner, if you look closely, you see a pair of legs disappearing into the water—they echo yours exactly (or so I thought). Auden's poem:

About suffering they were never wrong,
The old Masters: how well they understood
Its human position: how it takes place
While someone else is eating or opening a window or just walking dully along;
How, when the aged are reverently, passionately waiting
For the miraculous birth, there always must be
Children who did not specially want it to happen, skating
On a pond at the edge of the wood:
They never forgot
That even the dreadful martyrdom must run its course
Anyhow in a corner, some untidy spot
Where the dogs go on with their doggy life and the torturer's horse
Scratches its innocent behind on a tree.

In Breugel's Icarus, for instance: how everything turns away
Quite leisurely from the disaster; the ploughman must
Have heard the splash, the forsaken cry,
But for him it was not an important failure; the sun shone
As it had to on the white legs disappearing into the green
Water, and the expensive delicate ship that must have seen
Something amazing, a boy falling out of the sky,
Had somewhere to get to and sailed calmly on.